It’s close to go time. We are supposed to be in China the weekend of August 18th. In the meantime, we are waiting for our visas.

Here’s how that went down. Rather than use a courier service (because the Chinese Embassy won’t accept anything by mail), we took our passports and complete visa applications, along with supporting documents (the list of documents necessary is on the Embassy’s website), to the Chinese Embassy’s visa department, which is, by the way, not in the Embassy building, but on Wisconsin Avenue. We parked under the building, a privilege which cost $10. The attendant told us it would probably take a while: “Very bad. 2, 3 days.” With that cheerfully covered, we took the elevator upstairs to the first floor and found a long line–we joined the que with no less than 60 people in front of us.

That was fine, though. Jenia heard that the Chinese are very picky about the size of the photos that must be included in the packet of stuff to be submitted–they want a rectangular size that is not the usual easy CVS 2×2. There is, on the third floor, a Chinese visa specialist who do pics, etc, so we left the throng and went up there. The pictures didn’t take very long. Our applications were complete with those, so back down to the waiting room.

Long hallway on the third floor. The visa service place is at the end of the hall.

We bided our time for about 3 hours before finally getting called to the window. Oddly, the guy behind the window hardly acknowledged our presence, other than to answer our questions. He gave us receipts and told us when the visas would be ready. That was it.

Tomorrow we return to pick the passports up–hopefully with no problems. As soon as I have our visas in hand, then we will have tickets ordered for us by the school.

It’s Sunday.  This is the last day of Eid al Adha, the festival of sacrifice, a four-day holiday which honors Abraham’s submission to God in willingness to sacrifice his son.  If you know the Biblical story, God ends up staying Abraham’s hand and provides a ram to be sacrificed instead.  Anyway, the holiday itself is a time when there are tons of sheep (and other larger animals) that are slaughtered and feasted upon.  We saw many fine animals in the backs of trucks, destined, most likely, to end up on the dinner table.  Besides the large meal with their families, Muslims will share a large portion of the meat with the needy, too, making the festival about providing for others.

These sheep are headed for…well, probably nothing good, at least from their perspectives.

This bull probably also is not much longer for this world.

As I said, it’s a four-day holiday, Jenia and I have just returned from a mini-vacation.  For our break, we packed our camera and backpack into the newly purchased Kia and headed east.  East, across the border to the Sultanate of Oman, into territory which Jenia has visited ever so briefly (making one of the famous Al Ain ADEC teacher spouse’s “border runs”), and which I had hitherto gazed upon through the razor-wire topped fences which insulate the UAE from it’s friendly neighbor.

The Oman experience was a lovely one, by and large.  It busted up some of our preconceptions into tiny little pieces, and we enjoyed seeing a new part of the world.

First, let’s talk about the new part of the world and getting there: our destination was Muscat, some 4 1/2 hours away on the coast.  Our route there took us across the Mezyad border crossing.  We hit the border around 11:30, parked, went inside, paid 50 AED each for visas (just stamps in the passport), and purchased automobile insurance coverage good for Oman (which was only 80 AED for a week, the briefest amount of time they’d sell to us).  After spending a solid hour in there, we finally got out and headed on our way.  There was a lesson in this: on Eid, travel early to avoid crowds.

The scenery was nothing like we’d expected: instead of dunes and wide-open spaces, we paralleled a mountain range most of the way.  There were a few stretches where there were dunes, but there were plenty where the desert was barren, rocky, and flat, with little trees which bring pictures of the African bush to mind.

This stretch of desert was unusual for its dunes.

The Kia contemplates the stretch of 120kph highway ahead, wishing it could go faster. 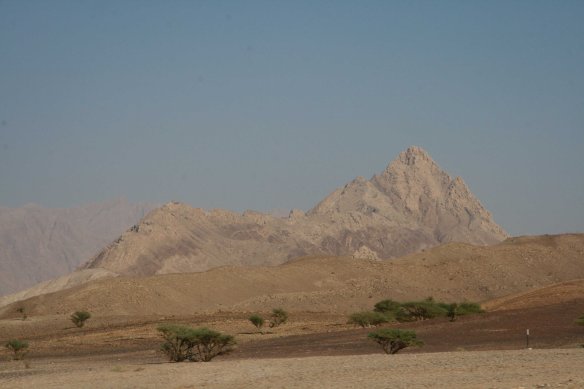 We traveled along the flank of a range of mountains which look more or less like this.

The road signs leave a little to be desired, as do Google maps.  Fortunately, we only made a couple easily corrected mistakes along the way.  Nonetheless, by the time we arrived in Muscat, the sun was nearly set and it was impossible to see very much of the ruggedly beautiful landscape.

We grabbed a bite to eat at a local joint with outdoor seating where an Indian waiter beckoned, “Come, everyone happy!  Table right here,” and soon friends of ours from Al Ain who were also vacationing in Muscat joined us.  We all went to the Mutrah Souk, a traditional style Arabian market, which was a bustling mixture of sights, sounds, and scents.  The air was heavily perfumed by strong, oily fragrances, incense (frankincense, in particular), and other things, sometimes less savory. 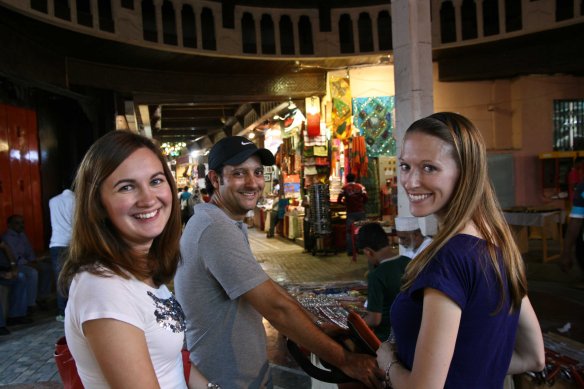 Enjoying the souk with friends.  Textiles, silver, gold, kitsch, and more, it’s all available there.

On to preconceptions.  Here’s how at least one of those got smashed.  A beautiful abaya and shayla-clad Omani woman started talking to us at one point.  Her brother was inside the same stall that our friends Frank and Melissa were shopping at.  “I could get that [same item that your friends are looking at] for 1.5 [instead of 2],” she said, “Because I am Omani.”  She offered advice on which pieces matched best, and she watched Melissa bargaining with great interest.  The vendor wanted 5 riyals. “He’ll do it for 4,” she told me quietly, as Melissa low-balled away.  “4 is a good price.”  Sure enough, after a moment or two, Melissa struck a deal at 4.

Now, this was interesting because in Al Ain, Emirati women are friendly enough to Jenia, but they hardly speak to males, whereas this lady didn’t mind speaking to me at all–there seemed to not be the barrier between men and women that there often is erected here in the Emirates.

I asked the woman about her henna, which ornamented her fine hands in brown floral patterns.  “Is it for Eid?”  She smiled and told me, “Yes, for Eid.”  She told me where the girls could get it done, and told me that there are two kinds of henna.  “There’s black henna and red.  This is red,” she said, indicating hers.  “But we don’t do the black anymore, because it is bad for sensitive skin,” she said.  “Better the red.”  I think if we’d hung around, she would have happily talked to us about anything and everything for as long as she was able.

So, there went one preconception: that Arab culture is more or less the same in the Gulf states.  Evidently not.  Jenia’s going to be writing about another encounter we had that further altered our vantage points on people here, in a very good way.  But I’ll let her do that, and not get into it just yet.

The daylight revealed the rugged, rocky landscape that Muscat is built upon.  This shot is in the Mutrah area.  You’ll notice the fortress tower atop one rocky peak.

This post features the word authenticity.  Here’s why.  The city of Muscat manages to feel more genuine than Abu Dhabi or Dubai.  You must understand this might sound a little contradictory at first, because most of the people who were working in the stalls in the souk or at the restaurants were, just like in the UAE, from another country (usually India).  But I say it felt more authentic because Oman’s development feels less forced and artificial.  Muscat doesn’t feature a ton of high-rises, and it doesn’t have the world’s tallest this or the world’s biggest that.  It doesn’t appear to be in a contest to prove itself.  It feels content to be itself, and that self is more relaxed and less hectic than the UAE tends to be.

Jenia took this photo of the Mutrah area by night.

It’s hard to explain the final reason that I call our trip a journey into authenticity, but I’m trying: the people themselves seem warmer and more at ease with being themselves in public.  Or maybe it would be better to say they seem less guarded, more open.  Whatever the case, they seem a bit more natural to me.

It costs a little money.  Not a lot, but enough that you should plan on it.  Basically, Jenia needs all the things that I needed–passport photos, copies of her passport, and a couple of other documents.  Here’s how to go about it if you’re an ADEC teacher and your spouse is following you.

1) Have the marriage certificate that you got authenticated in the USA attested and translated.  Infinity Services, in the Marina Mall in Dubai (and other places) is a good reputable place.  It costs 210 dirhams for the attestation and 100 for the translation.

2) Follow the instructions that ADEC provides.  If you’re unaware of those, the gist is this: fill out an application online, then, after that is approved, provide original documents to ADEC.  They’ll get a visa prepared.

3) The last step is a medical exam, followed by submitting your spouse’s passport to ADEC so that they can put the final visa in it.

The prevailing wisdom is to get #1 done right away, since it might not take very long for us to get our passports back, and if step #1 is already complete, the rest is pretty easy (or at least so I’m told).

I’ll write another entry after I get to experience more of the process.

Infinity Services is found on the Lower Basement level of the Marina Mall, below the Paris Gallery.