Maybe you don’t know the names Ted Simon or Charley Boorman. That’s okay. I’ll tell you who the two men are. Simon rode his Triumph around the world on an incredible 4-year journey, and Boorman rode a BMW around the globe in 2004 in less than 4 months. They’re dyed in the wool motorcyclists and dedicated adventurers. They love to explore the world and both authors have made livings based on their travels.

I must admit my only exposure to Ted Simon was through the TV mini-series “The Long Way Round,” which chronicled Boorman’s trip from London to New York City with his friend Ewan McGregor. The show is, by the way, worth your time–it’s fun, funny, and will appeal to the adventurer in you, even if you don’t ride a motorcycle or understand why some of us do. Take a minute and look it up, then set some time aside to enjoy a fascinating look at the world from the point of view of a couple of motorcyclists. That said, Simon is, as it turns out, the very model of adventurousness.

But I get ahead of myself. See, I attended the Emirates Literature Festival today in Dubai, and went to a session called “Around the Globe with Charley and Ted,” during which the authors discussed some of their commonalities: how wanderlust struck, how they started their travels, managed to fund them, and so forth. Held in a ballroom at the Intercontinental hotel in Festival City, the event was pretty full. I found an open seat at the front, and enjoyed an hour of the men’s musings. 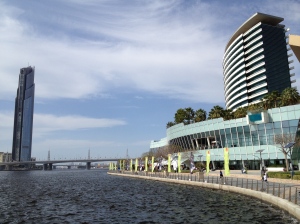 The Intercontinental at Festival City.

Simon’s big journey included run-ins with the law (arrested as a suspected spy, for example), romance, and the momentous discovery that people all over the world are generally nice, welcoming, and helpful. Boorman didn’t get arrested, but found much the same thing–people everywhere, and I mean everywhere, are kind and helpful.

Speaking of countries that are deemed dangerous, Boorman said, “When anything bad happens, the news makes a big deal out of it.” He mentioned 24 hour news networks and the need for them to fill up space and time. “You never see a news reporter saying, ‘I’m here, and there’s nothing happening.'” To illustrate the point, Boorman mentioned looking over rice paddies in northern Iran, in a scene that might have been Thailand, with people working and wonderful agriculture everywhere. This seems a far cry from the image that Fox and the other news networks paint of Iran, doesn’t it?

Many of us don’t realize how much what we see and hear on the news shapes our perceptions. Simon elaborated on the idea, to much the same effect. Don’t forget there are millions of people living absolutely normal lives in most of the countries that are deemed “dangerous” by those selling newspapers. In essence, the world is a safer place than it is made out to be.

Indeed, there were plenty of people who advised me against moving to the UAE–it could be unsafe, it would be hard on Jenia as a woman, and so forth–but most of these people, though meaning well, hadn’t lived here, or even been here. They were all wrong; it’s been a great place for us to live.

Simon said that many people approach him and tell him they’d love to go on a similar adventure, but they can’t, because they have a mortgage, a job, etc. His response was profound: “Drop it all and leave it because you’ll be a much more valuable person when you come back.”

In 2003, I was talking to a friend named Gwen, a woman who was practically a surrogate mom for a while there. “I’d love to go to England,” I told her. “Well, why don’t you go?” She said. I blinked my eyes a few times, processing that. It really was that simple. I could save up some money, quit my meager little job, and go see more of the world. A moment before I hadn’t considered it that clearly. It had seemed like I had shackles holding me back–commitments and stuff–but they didn’t make an ounce of difference. That was more or less the beginning of my serious international explorations.

You’ve seen my posts on here about how living and teaching abroad have changed Jenia and me for the better. At this point, I couldn’t agree more with Simon’s advice. I may not travel the world in as extreme a manner as Simon did, and I may not host a TV show or manage to ride my bike as much as Boorman does his, but in the same manner as these two men, I’ve found a way to fund my globe trotting, to indulge the travel bug and discover that the basic desires of every person on the planet are the same.

If you want to explore, you should. Don’t worry about your place in the pecking order, don’t fret over what you’ll leave behind, just go, because it will change you fundamentally. Fear of leaving the familiar behind and exchanging it for the unfamiliar, fear of dangerous countries, or fear of talking to new people may prevent us leaving our comfort zones. Don’t be afraid. Go.

Charley Boorman, happy to pose for a picture with me at today’s book signing.