Man, I”ll tell you what–I want to buy a 4×4 (I mean, a real 4×4, something brawny, not the puny Kia Sorento we happen to own) and head to the desert as often as possible.

Friday afternoon I had a great time in the dunes with a bunch of off-roading newbies and a crew of very patient and helpful experienced pros.

I’ve never once done this kind of thing before.  It was great.  There is nothing quite like the experience of cresting a dune (and getting stuck while driving your buddy’s Jeep) in the middle of the Arabian desert.  Ditto that descending a steep slope.  The ascent is a curious mixture of gentle approach (depending on the angle of the wall) and then nail-it-to-the-floorboards-and-watch-the-sand-fly power.  Learning the balance is a bit of a challenge.  The descent is generally pretty easy: approach slowly, keep it in low gear, and let the engine to the braking as you float down the slope.  However, go too fast off a steep hill, and you can find yourself in trouble, as you might damage your vehicle, or at the very least, bottom out the suspension.  Yeah, the suspension bottoming thing happened to us a couple times.  Vroom–swish–crash!  But not when I was behind the wheel.  I promise.

In all, I had a ball.  I probably should have taken the Canon Rebel along for some better quality photos, but I was a bit afraid it might end up covered in sand and totally ruined.  So rather than risk it, I just had ye olde iPhone in its trusty Otterbox case.  I just may purloin some pictures from fellow photographers for this post, however, and in that case, I’ll give those picture-takers credit. 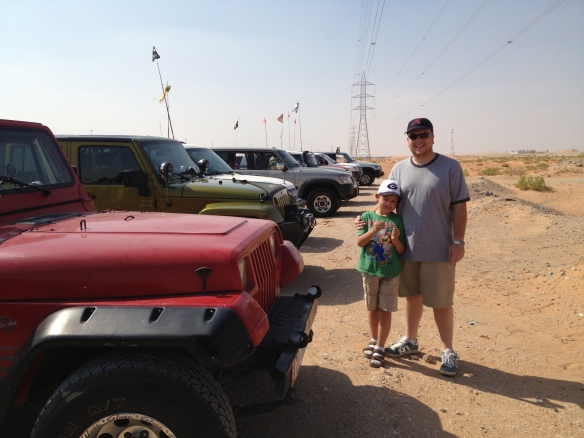 My buddy Jon and his son as we are preparing to head out.  Here, the 4WD has just been engaged on his old Jeep for the first time since he’s owned it. 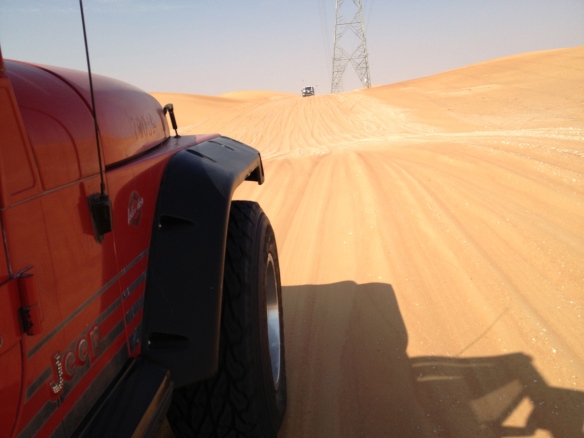 On the rough road, getting ready to head into the serious sand. 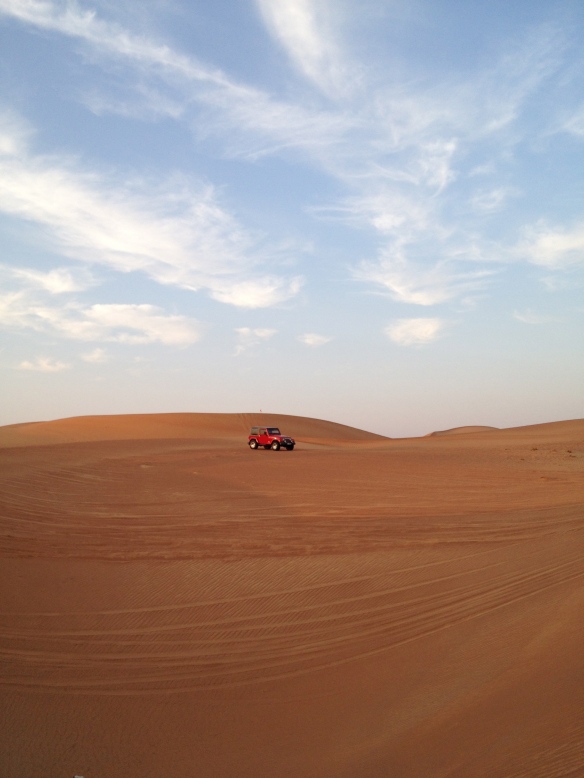 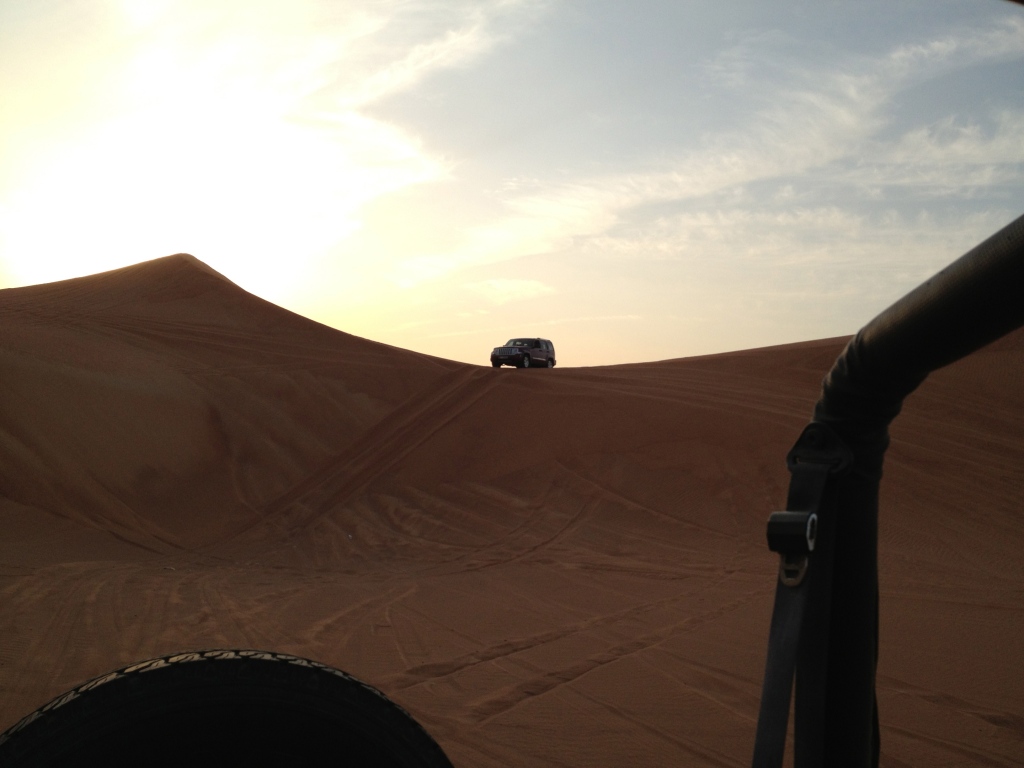 Jon’s son ended up in the nice, cool, air conditioned cabin of this Jeep Liberty (sold here as a Cherokee) which is shown here about to come down a dune. 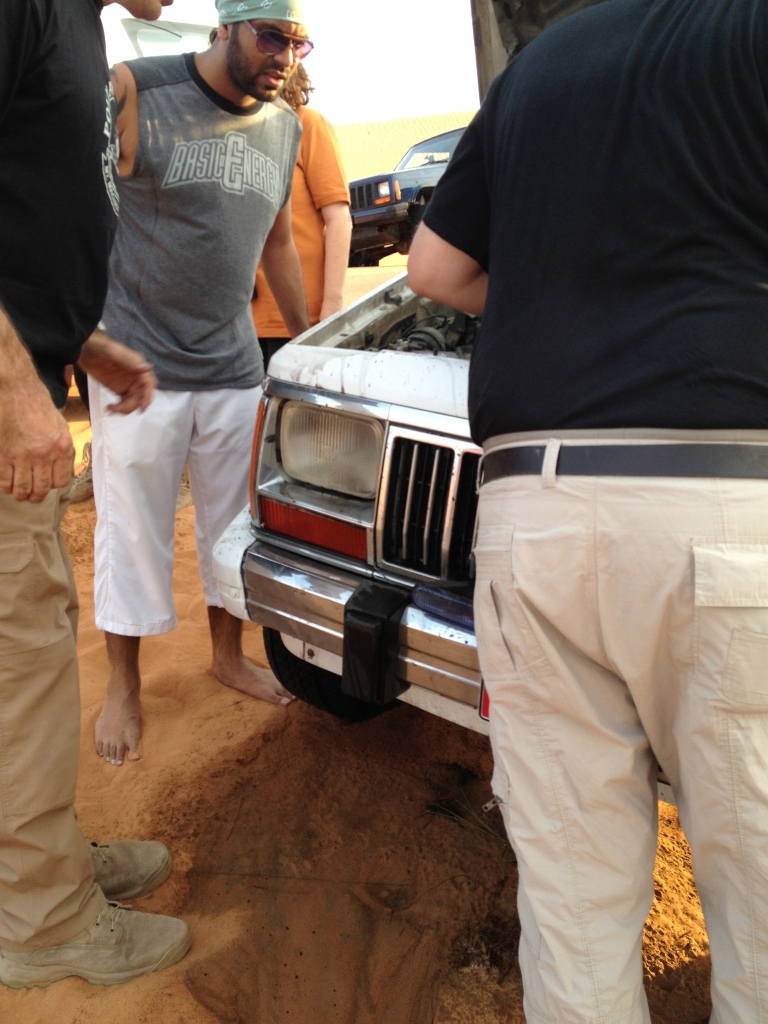 The day’s only casualty that I’m aware of was this Cherokee and its exploded radiator. 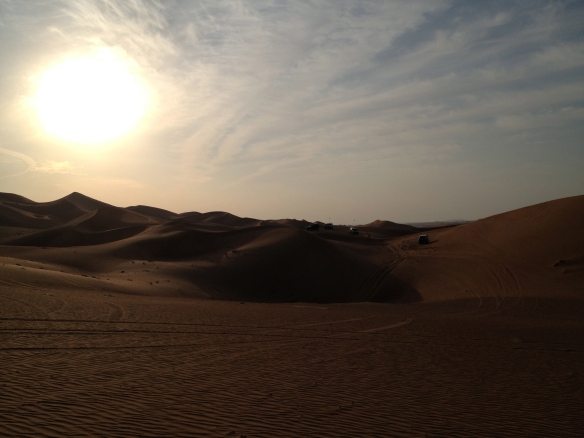 Check this view out. I’d been longing to be out in the dunes ever since I arrived. It was as cool as I hoped.  Don’t turn down the opportunity to get out there with some experienced folks. 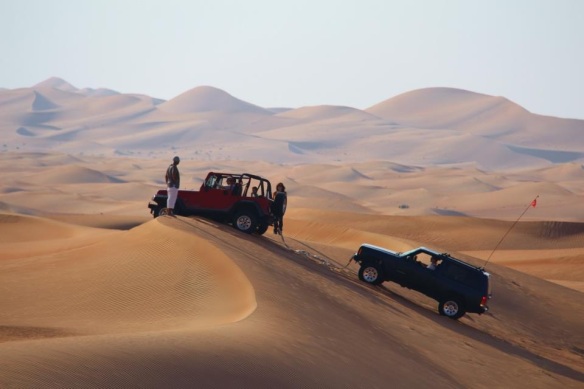 And this would be a photo I’m borrowing from Heidi Cothron. Maybe she’ll let me borrow a high-res version later.

So, I’m discovering the joys of living in the Arabian desert.  This off-roading stuff is seriously fun.  It ranks up there, in an altogether different way, of course, with riding a motorcycle.  LIke hopping on a bike and heading into the hills, being in the desert amidst a sea of dunes and away from the city is relaxing, and again, like riding a bike, there is definitely an element of risk involved in heading into the sand.  Your machinery must be in good shape, and it must be tough.  You’ve got to exercise good technique, or you’ll have serious problems on your hands.  Again, this is much like motorcycling.  In other words, it’s great fun and I highly recommend it.