I’ve just finished reading Upton Sinclair’s turn-of-the-20th-Century book “The Jungle.”  It’s about the disgusting Chicago meatpacking industry and the poor souls in its employ.  The narrative follows a fictional family who immigrates to the US from Lithuania and the numerous trials they endure on their way to becoming cogs in the industrial machine.  Like all overused machinery, the family suffers greatly and are all driven to overwork before that finally takes its toll and things fall apart for them.  Sinclair’s book ends in an unfortunate way, for it becomes mere Socialist propaganda.  But up until about 3/4 or even 7/8 of the way through, it’s quite a good read.  Now, although I ignore the propaganda, I find one turn of phrase I stumbled across during the latter part of the book interesting and even poignant.  Sinclair calls those in the employ of the meatpacking trust “wage slaves.”  For, you see, the employees are technically free, but they’re too poor to live a life of any quality and they have no other viable options but to return to the torturous jobs they have and maintain them as long as they can.  In Sinclair’s book, this usually means until someone is injured on the job, whereupon they’re laid off and cast out.

Maybe we can make the argument, like Sinclair might if he were still kicking, that this kind of thing is alive and well in America.  But I’m not sure.  Since “The Jungle” was published, the meat industry was forced to clean up and working conditions have undoubtedly improved by leaps and bounds.  In fact, the Food and Drug Administration was formed partly as a result of the novel’s publication.  On the FDA’s website, Sinclair is credited thus: “the nauseating condition of the meat-packing industry that Upton Sinclair captured in The Jungle was the final precipitating force behind both a meat inspection law and a comprehensive food and drug law” known originally as the Wiley Act, which became law in 1906.  Ah, the power of the pen.  Although the Wiley Act and the FDA is a big deal, Sinclair was really more interested in the plight of the poor working man than food safety, as his Socialist ending makes abundantly clear.  It would take nearly four decades for a national minimum wage to be introduced in 1938, and at 25 cents it was equivalent to $4.13 hourly in 2013. It’s hard enough to live on minimum wage in the USA now, and it’s $7.25 in most states–imagine surviving on way less than 5 bucks an hour, especially when you’ve got to pay rent, buy groceries, fill up your gasoline tank, and spend money on all the necessities of life.  It’s hard to imagine, isn’t it?  So does “wage slavery” still exist in the States?  I don’t know.  I’m open to comments on it.  I’ve worked for minimum wage and below, but I climbed upward since, and I couldn’t go back.

As I ponder the notion of folks who have no option but to work for whatever diddly amount they’re offered, it occurs to me that I see a certain amount of this every day here in the UAE.  It’s common to have house help here.  Most apartments or villas of any size have a miniscule maid’s quarters.  If you take a stroll through the mall, you’ll inevitably notice Emirati women shopping in Carrefour being followed around by Filipino ladies who are trying to keep the kids in line, pushing the shopping cart, and frequently being told what to take off the shelves and put in the cart.  I hate doing dishes, and I don’t really like giving up my weekend time to clean the house, so I thought, “Gee, we might be able to afford a maid.”  But Jenia is totally opposed to the idea.  “Those people are practically slaves,” she says.  Sometimes she goes even further and calls them slaves outright.  “Well,” I say, “They’re making more than they would at home.”  That doesn’t get my case any farther along, I’m afraid.  Just how much do these people make?  The pay range for maids/nannies tends to run about 1,000-2,000 AED monthly.  Divide that by 3.67 to find what they’re making in dollars.  These employees are usually expected to work 6 days a week, basically all day.  Lest you think I’m picking on Emiratis when I illustrate a point like I did above, I should say that there are quite a number of Westerners who hire help.  Also, mind you, I’m not criticizing those who take maids and the like into their employ–I’m pointing out that it’s a job with a surprisingly low wage. 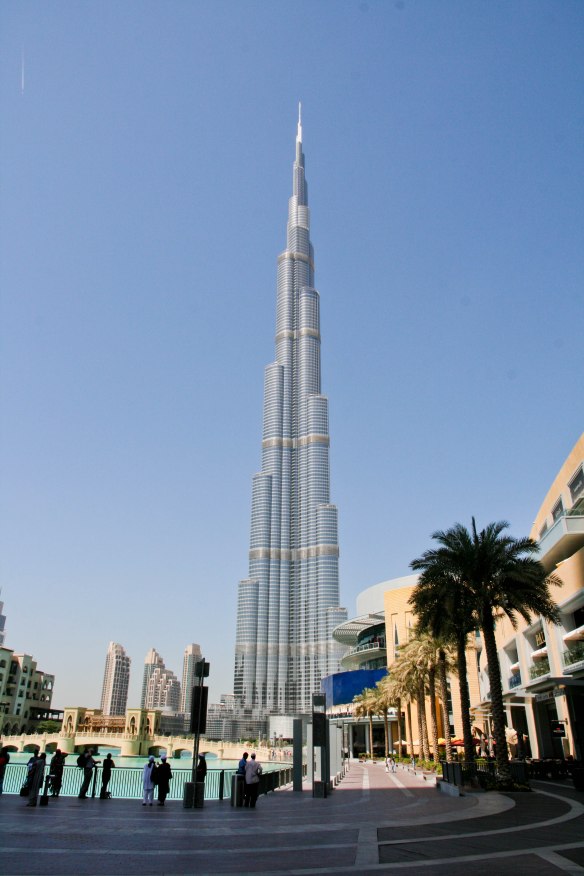 The world’s tallest building, the Burj Khalifa is one of Arabtec’s projects (completed in conjunction with Korean company Samsung and Belgium based Besix).

Besides house help, most other blue collar laborers are imported from eastern Asia.  The administration’s menial workers, the janitors and the like at my school, for example, are all from elsewhere.  Most of them are Bangladeshi, and they’re serving a 1-year contract.  I gave one of the guys a ride home one day, and he inquired as to what I make per month.  I didn’t tell him, but he told me what he made: 1,400 AED.  He told me that from that, he spends 500 a month on rent, 300 on food, and some on transportation.  The rest he sends home to his wife and baby.

A group of Pakistani men hang about in the Sanaiya area in Al Ain hoping for work as movers.

The ratio of Pakistanis and Indians living here is very high.  While they are certainly not all unskilled, there are many Pakistani men who come as unskilled laborers.  At night they fill up the parks in downtown Al Ain enjoying the relative coolness of the evening.  I’d venture to guess that most of the construction workers I’ve seen are Pakistani, but that is only a guess, and likely not representative of much.  Last month there was a big strike in Dubai as laborers refused to come to work for Arabtec, the largest construction company around.  I watched the newspaper coverage of that with great interest.  I was interested because I’ve seen workers being transported from construction sites when they take their midday break in the summer months.  It will be far above 100F and these glistening, sweaty men load up into big buses, windows wide open since there is no air conditioning in the buses.  Usually these workers live on the construction site or nearby it, in housing provided by their employers.  If you think that this means nice housing, you should probably join me in doing some research.  Is it squalor of the type these people might have to deal with in their home countries?  I don’t know.  I haven’t been to Pakistan or where have you, and I haven’t set foot in any of the housing provided by Arabtec or any other big company.  At any rate, these laborers typically work 6 days a week, and put in long hours.  The strike was news because striking is patently illegal here. In a country with no minimum wage, I was also curious to find out what these workers made.  Well, if you clicked on the link in my text, you’ve already found out: they make about $160 a month, depending.  If you’re still curious, here’s another link providing a lot of detail, including much more about working conditions, housing, wages, and the like.  Now, a month after these people boldly defied the authorities in order to try to get better treatment, they’re being dealt with. According to a 7 Days Dubai article, many of those who didn’t go to work are being deported.  7 Days is something close to a tabloid–they’re quick to report, but usually short on details and depth–but they do offer a look at what is happening in the area.

Seen here from atop the Burj Khalifa, the Address is another of Arabtec’s completed projects.

I am not an investigative journalist, so I’m not knocking on doors and visiting all sorts of people all the time, but I do have eyes, and I do go to various areas in town, and I do interact with people.  And clearly I read, too.  So I end up wondering, in old Socialist style phrasing, what the plight of the worker is nowadays.  Do we continue to exploit and even victimize unskilled laborers?  Do we do it in the USA?  Does the UAE do it, right here around me, where I’m living?  I’m among the masses of foreigners who work in the UAE because I get more pay than I get at home.  In my case, the pay isn’t stunningly high, but I have lots of perks thrown in that end up being equivalent to a notably larger payday than I’d have in the States.  Many times I’ve debated with myself whether it’s worth being here or not, considering the difficulties at work.  But I’ve learned to cope with the challenges and I’ve adapted, more or less, to the culture here and figured out (to some extent) how to work within the environment I’ve chosen to move to.  I can’t complain about my situation, since I chose it, and since it’s always possible for me to bail out and leave if things get unbearable for some reason.  Do these unskilled laborers have the same options as I do? They certainly work much harder physically than I do.  Can they leave if they choose?  What kind of toll does this work environment take on them?  Do the pros of the jobs here outweigh the cons?

I’m not answering these questions today.  I’m just posing them because I think they’re worth exploring and seeking answers to.  If you feel you can contribute to the topic, you’re free to comment.  In keeping with the spirit of our blog, I’d ask that you keep your comments civil and respectful to all.

In parting, I’d like to leave you with the link to a post on the blog Sweden and the Middle East.  It’s worth a read as it’s thought-provoking and just might provide some insight into what life can be like for a domestic worker.  Have a gander at it.  Let the author (and me, if you get around to it) know what you think.