Did I ever tell you that I maintain a column for the hometown newspaper “The Citizen’s Times,” based in Cuthbert, Georgia?  Maybe not.  If not, it’s probably because you didn’t ask.  Anyway, I do.  I don’t know if anyone reads the column or not, but the editor keeps on taking my articles, so I guess it’s not a total flop.

Usually I find that writing for a newspaper and writing for a blog are two very different things, and although I might share ideas, very rarely am I able to adapt one directly to the other.  There was one time when I missed a deadline, though, that the editor copied a post from here and used it for the week’s article, so, hey, whatever works.  This week, though, I think my article will work just fine for the blog, too.  And you’ll love seeing the pictures that accompany these words.  One of the joys of blogging is the unlimited space–plenty of space for images.

So, without further ado, I present to you my week’s article from the Citizen’s Times.

The long weekend is over.  I went back to work today.  Fortunately, the remaining workdays before the trimester ends are short ones, so they’ll pass quickly.  But you don’t really care about my working environment, do you?  I’ll save that mundane stuff (Ha, if only that were true!  There’s never a dull day at my job) for another week.  Anyway, did I mention a long weekend?  That’s right; we had a four-day weekend that included Sunday and Monday off.  It was lovely.  The occasion?  National Day.  The United Arab Emirates celebrated its 41st birthday on December 2, and they did it in grand style.  The lead-up to the holiday covered at least two weeks, during which time various decorations started appearing about town: lights (the UAE’s flag is red, green, white, and black, so the lights are a pretty fair approximation of Christmas lights, and they put us in the holiday mood) ornamented the date palms, buildings, and, give or take, any ordinarily unoccupied space in the middle of a random town square.  We started seeing cars and trucks all decked out in stickers, flags, and even appliqués that bear the face of UAE founder and all-round-hero Sheikh Zayed.  Jenia and I photographed a couple of the most over-the-top ones, and when we shot one, the driver stopped and rolled down his dark-tinted windows to pose, waving double peace signs.  His passenger called out, “Happy National Day!”  There were fireworks shows, which usually featured the colors of the flag.  There was a manic kind of consumeristic–and perhaps exhibitionistic–patriotism that we don’t really see in the USA around Independence Day, despite the basic idea of the holidays being the same.  The holiday has come and gone, but the lights still hang, and people’s cars are still wearing their holiday apparel.  It’s quite a thing to behold.

How ’bout the windshield applique? 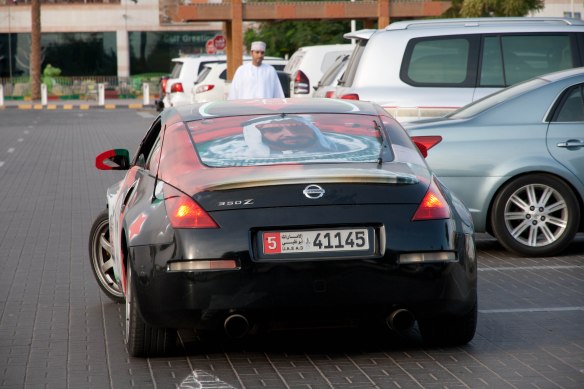 The Sheikh shows up again. 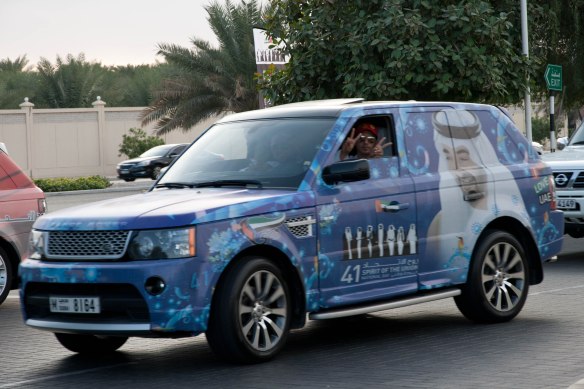 Peace signs all around!

Even motorcycles are not exempt from the madness.

If iPhoto will cooperate, I’ll add some more photos later.  For now, I fear I must call it a night and retire to my bed.  Until the next edit.